The time of first snowfall of Mount Fuji varies a lot from one year to another. It can be early September or earlier, or it can be late October or even later sometimes.

Most of the climbers start trailing up this highest mountain in Japan (3,776 meters from the sea level) from its trail-head called “Fuji-san gogo-me” (Mount Fuji’s 5th Station). In 2018, the fifth stations and trails on Yamanashi Prefecture side (north side) were opened on July 1st and those on Shizuoka Prefecture side (south side) on July 10th, and the all trails on both sides were closed on September 10th. The trail opening and closing dates are set to secure safety of the climbers who otherwise may encounter a snow hazard.

No Front or Back Side of Mt. Fuji

Mount Fuji is known for its symmetricity in conical shape. But it is a general description, hence may not be specific enough. If you look at it a little closely, you will soon notice a difference in its shape especially when the views from north side (Yamanashi Prefecture side) and south side (Shizuoka Prefecture side) are compared one another. To describe this difference, or to discriminate the other, the people in Japan have used unique expressions in its history.

Of Japan, Pacific Ocean side used to be called “Omote Nihon” (Front-side Japan) and Japan Sea side was called “Ura Nihon” (Back-side Japan). Along with establishment of equality movements, these discriminative expressions lost their value thus no longer in use. For the same reason, comparative expressions of “Omote Fuji” (Front-side Fuji) and “Ura Fuji” (Back-side Fuji) are gone. Yamanashi Prefecture is an inland region with no coastline around. Yet, the people there would not be happy to hear somebody speaking to sound as if they were living on “back side”.

During Shogunate era (Edo period), today’s Shizuoka Prefecture constituted a large part of “Suruga” county and Yamanashi Prefecture composed “Kai” county predominantly. By making use of these classic and still respected local identifications, Mt. Fuji viewed from Shizuoka and Yamanashi sides are called “Suruga Fuji” and “Kai Fuji” respectively to make everyone happy. We never say “Shizuoka Fuji” or “Yamanashi Fuji” as the people are apt to prefer shorter wording.

“Suruga Fuji” and “Kai Fuji” are also called “Onna Fuji” (Female Fuji or Womanly Fuji) and “Otoko Fuji” (Male Fuji or Manly Fuji) respectively sometimes. It may be a little confusing to the people who believe that all mountains should be “female” in gender. Even in the countries where a mountain must be “she”, however, many mountains are named manlike.

It is true that Suruga Fuji look more gentle or womanly than Kai Fuji. But the use of these comparative expressions is not freely recommended as the social issue of sexual harassment is more sensitive than ever.

All the people seen in the photo above were tourists from China. On many fine days, particularly in the fall and in the winter, Lake Yamanaka begins to be foggy soon after the sunrise, thickening and lasting for a couple of hours, as do the places like the Great Lakes. 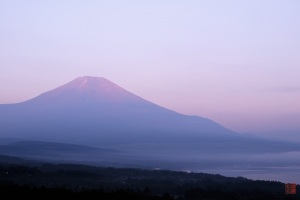 Together with my wife, I enjoy another life by having a resort condo in Yamanakako, a 1,000-meter high lakeside village on the northern base of Mt. Fuji. The site is away from our hometown in Yokosuka City near Tokyo by about 110 kilometers in driving distance. Both my wife and I like birdwatching and photographing around Mt. Fuji in addition to her hobby of watercolor painting and my hobby of Haiku composing. – Author: Junobird (Muku Watanabe)